Skip to content
You are here
Home > Social > What I learnt from manually unfollowing 3,500 people on Twitter

Like a lot of social media, Twitter is something I’ve always gone through phases with. There’s been months when I think it’s the best thing in the world then there can be long periods of time (most recently over a year) where I almost forget it exists.

The primary issue for me, is that I’ve misused Twitter – I’ve seen it as a system for self promotion over an actual social network, which isn’t the reason I originally started using it… it’s just what it became for me and by the looks of it, the majority of it’s users.

In 2019, I want to get back to using Twitter how it’s supposed to be used – as a way to engage with people and have a sense of an online community. My friend Alex (@AlexDeutsch) put it best when he first convinced me to sign up, he said “Facebook is a bunch of people you do know talking about boring shit – Twitter is a bunch of people you don’t know talking about interesting things.”

So… to restart my experience I had to clean house and fix things I had intentionally done which led to me walking away. I had to unfollow 3,500 people that I had no original need to follow, that I didn’t have any affinity to and that were clogging up my feed to make the platform essentially useless. Going through this process was pretty interesting and I learnt a few things along the way:

1) I was far too obsessed with my follower count

When I first started using Twitter, I got excited when random people followed me, so naturally I followed them back. This mentality has put Twitter in a pretty unique position where users are able to effectively self-alienate themselves from the platform. If you follow back everybody that follows you, your feed will become garbage and you’ll stop using the platform and churn.

I got an initial follower base from people I knew – that increased tenfold when my startup was mentioned on TechCrunch in a few articles, but I wanted more. I started using a platform that allowed me to mass follow users then unfollow ones that didn’t follow me back within a few days – when I look back on it, it’s really quite an awful thing to do.

As I unfollowed people in their thousands, I saw these trends flash by me – I followed a tonne of journalists and startup publications when I ran my business (although to be fair, I met my wife this way!), then I went to work for carwow and followed a bunch of automotive blogs, journalists and enthusiasts (I can’t drive and don’t care about cars) – as I got more involved in SEO that became a theme and pretty much anybody with SEO tagged in their profile could’ve been followed.

The irony of it all, is the biggest reach I have ever gotten from a single Tweet had nothing to do with startups, SEO, automotive or journalists – it was a picture comparing Peyton Manning to a dog: 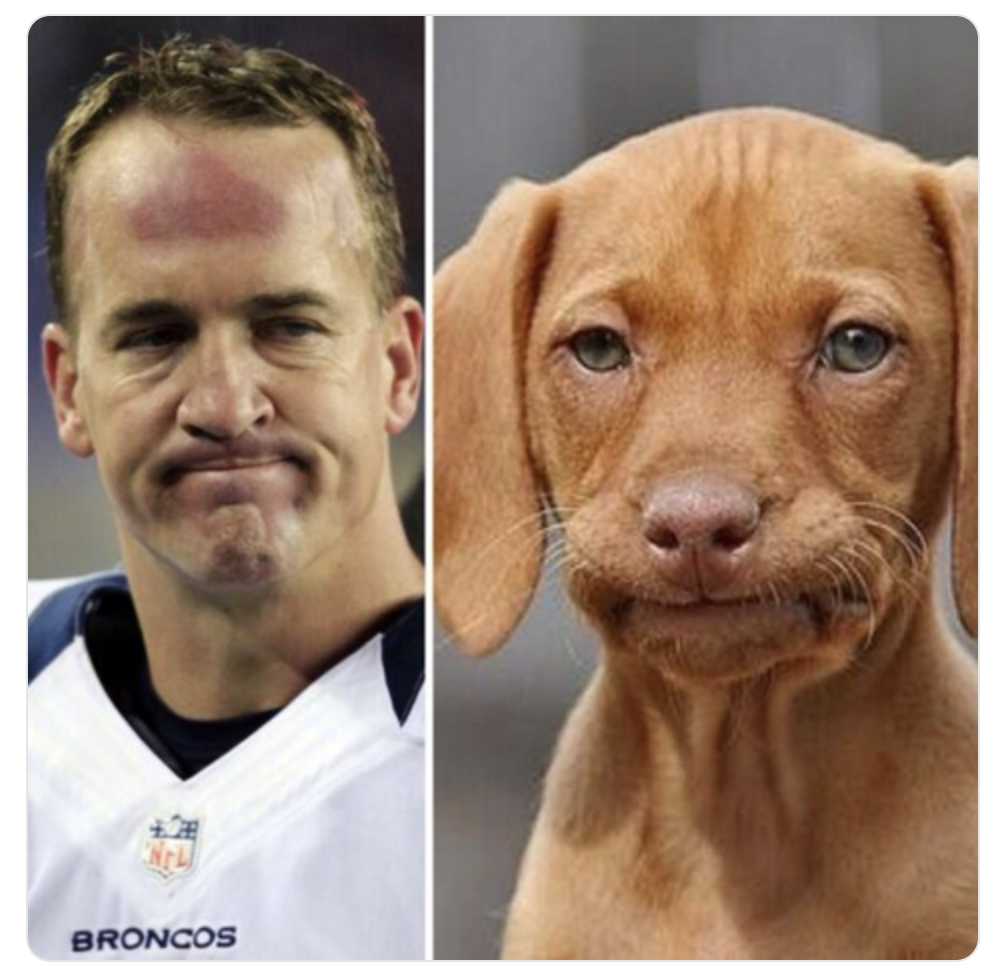 Bottom Line: I’m only going to follow accounts I genuinely care about – I went from over 3,500 to <100 and now I look at Twitter multiple times a day and find everything interesting. I’m also not going to focus on how many followers I have, it’s a vanity metric that promotes the wrong type of usage.

I haven’t used Twitter with any real frequency in a couple of years and pretty much not at all in the last 12 months – so it was amazing to see how many accounts had been renamed and/or had descriptions related to things that barely existed in the public eye back then. The most recurring ones were about cryptocurrency ‘experts’ when they were most likely followed by me because they were about SEO or automotive in the past. It’s amazing how quickly people can establish expertise.

This for my is a symptom of everything that’s wrong with Twitter, similar to the platforms that I mentioned in the prev. point. There are so many accounts out there that only exist for publicity and to sell something – accounts that most likely never log in to view their feed and only care about the notifications section.

Bottom Line: I will be 100% authentic and not go after fads/trends

3) It’s crucial to have your own voice

Hundreds of the accounts I unfollowed were near identical, sharing the same or very similar content – typically things that were recycled. I’m sure some of them were bots but a lot of them will be real people that have read in another blog somewhere that you’re supposed to Tweet 10 number of times a day, then just load up a scheduling tool to hit their metric. I saw a description of one account that literally described itself as existing to RT TechCrunch…. why?!?!

In addition, the vast majority of accounts I unfollowed weren’t people, they were companies or brands. I believe this backs up the content sharing mentality and is a big contributor to Twitter’s audience fleeing. People want to follow people – accounts should inspire, collaborate, engage, not just promote. Twitter’s mission statement is “give everyone the power to create and share ideas and information instantly without barriers” – that sounds like it’s written for people over companies.

Bottom Line: This website used to be called SpikyPineapple, I thought I needed a branded identify in order to blog, but that is restrictive when it comes to actual 2 way communication and even if it wasn’t from a tone perspective, wouldn’t people rather interact with a human than a logo? I’ve remade the site to represent me as a person. The content I post throughout 2019 will focus on a topic close to my heart – productivity, but may also leak into other topics (like this!). I will be mindful of everything I share across Social Media and ensure I don’t fall into the automation trap of recycled content from other people. I’m also a human being, so have views outside of blogging, for example I’m a football fan and I’m terrible at fantasy football… but like to think I’ll win every week.

It’s important to remember why these platforms exist and why they grew so quickly – it’s to connect people. Twitter isn’t just about following people you don’t know, it’s about the people you do know too. As I peeled back the layers of noise on my follower list, I found a tonne of old colleagues and friends that I realised I had completely lost touch with.

Bottom Line: If used the right way, I do believe Twitter’s mission of sharing ideas and information without barriers can be achieved, but I also think Twitter can be a tool to stay connected and re-engage with people you meet throughout your life, something I plan to do a lot more of this year.

That’s all folks! Thanks for reading.